MG University became a participant in NCPOR’s major national programme on survey and exploration of Hydrothermal sulphide vents/ deposits in parts of Central and South-West Indian ridges. The contract for undertaking the proposed exploration activities in the region had already been entered between International Seabed Authority (UN)  and the Government of India. The cruise is onboard R/V MGS Sagar. 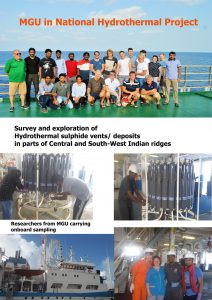